Now in our 82nd year

Donate
We depend on your support
Subscribe
Get concert updates & more

This season, 2022-2023, Tri-County Concerts Association proudly celebrates its 82nd year as one of the region's most significant venues for chamber music. 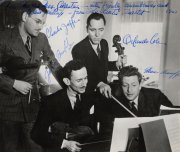 In December 1941, chamber music in the Philadelphia suburbs received a remarkable boost from Ellen Winsor and Rebecca Winsor Evans when the two sisters decided to sponsor the original Curtis String Quartet in a free public concert at Radnor Junior High School. An early program tells us that "its aim was to bring the spiritual peace and the beauty of music in the lives of our fellow-citizens who were living under the shadow of war; thus strengthening them with the knowledge that music is the great international language which unites all peoples in the common bond of friendship." The musicians were enthusiastically received and the Tri-County Concerts Association was successfully launched. Two years later, the fledgling organization held its first Youth Music Festival and assumed a vital position in the area's cultural life. 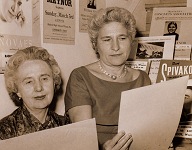 From the early 1950's to the late 1970's, the driving force behind the Tri-County Concerts Association was Mrs. Guida Smith. Her energies were devoted to bringing top musical artists to the community, as well as relatively unknown virtuosi who later became internationally renowned. In 1979 Jean Wetherill of Radnor assumed leadership of the Association. She fostered the organization's continued health during a period of transition. That year, the Association became a nonprofit corporation in order to strengthen its mission and its increasingly important fund-raising functions. When the Radnor Middle School underwent renovations in 1980, the concert series was relocated to Delaware County Community College. After a brief return to Wayne Auditorium in 1987, the series moved to Centennial Hall at Haverford College in 1989, then to the Main Line Unitarian Church in 1992 and now to our present location at Eastern University since 1999. 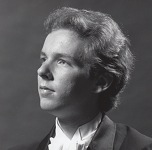 Throughout these changes, Tri-County upheld its tradition of the highest musical standards. Its roster of virtuoso performers includes Marian Anderson, Eugene Istomin, Vladimir Sokoloff, Paul Badura-Skoda, the Budapest and Juilliard String Quartets, Leontyne Price, Rosalyn Tureck, Cynthia Raim, and Peter Wiley, among others. In recent years, Tri-County has focused primarily on "Emerging Artists," one part of its heritage. From the start, Tri-County has showcased brilliant young musicians who were on their way to distinguished professional careers. When he performed with Tri-County, William Kapell was only twenty, Gil Shaham was seventeen, and Pamela Frank was twenty-two. Local stars who appeared with us early in their careers include the legendary Anna Moffo, as well as Marcantonio Barone, Mimi Stillman, and Eric Owens. We carry on this fine tradition today by continuing to bring you outstanding young musicians in our chamber series.

No less important is Tri-County Concerts' Youth Festival, which has been a stepping-stone to achievement for many of the thousands of young musicians who have participated. Former winners have established national and international careers as soloists and as members of major symphony orchestras. Opera stars Anna Moffo and Clamma Dale first received recognition in Tri-County's Youth Festival. At present, other winners hold positions as principals in the Pittsburgh, Cincinnati, Houston, Indianapolis, Los Angeles, and Oregon Symphony Orchestras, and four have seats in the Philadelphia Orchestra.

With both our Emerging Artists Series and our Youth Festival, we afford our audiences the opportunity to see and hear tomorrow's stars.