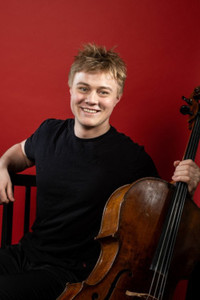 Jonathan Swensen first fell in love with the cello upon hearing the Elgar Concerto at the age of six, and ultimately made his concerto debut at the age of twenty performing that very piece with Portugal’s Orquestra Sinfónica do Porto Casa da Música conducted by his father, Joseph Swensen.

In the United States this past season, the Young Concert Artists Series presented Mr. Swensen’s recital debuts in New York on the Michaels Award Concert at Merkin Concert Hall, and in Washington, DC on the Alexander Kasza-Kasser Concert at the Kennedy Center’s Terrace Theater.

Mr. Swensen has also made debuts with the Copenhagen Philharmonic, Phiharmonia Orchestra at Windsor Castle and Sun Symphony Orchestra in Vietnam, and he recently performed a reengagement with Denmark’s Aarhus Symphony Orchestra. He is also a frequent performer at festivals in Denmark, including the Schubertiaden, the Copenhagen Summer Festival and the Hindsgavl Summer Festival.