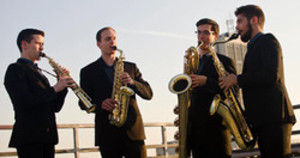 “Virtuosic to the core” (Textura) and hailed as “a tight-knit ensemble exploding with power and virtuosity” (Boston Musical Intelligencer), the Sinta Quartet is on a mission to bring the versatility, homogeneity, and excitement of the saxophone to audiences everywhere. Strengthening an already palpable connection with its audience by performing entirely from memory, the quartet provides a fresh take on chamber music that is at once beautiful, virtuosic, and a completely interactive experience.

The Sinta Quartet injects music and fun into the air for unsuspecting passersby by appearing in nontraditional venues such as grocery stores, bars, and other public places, but they have also performed in venues such as Carnegie Hall, Walt Disney Hall, and the Beijing Center for the Performing Arts. Since forming in 2010 as soloists for a tour of China with the University of Michigan Symphony Band, the quartet has concertized in 9 countries, 31 states, and 2 Canadian provinces, giving diverse audiences a chance to experience a classical saxophone quartet for the first time. The Sinta Quartet made history in 2013 as the first saxophone ensemble to win the Concert Artists Guild Competition’s First Prize, and continued to achieve success on the competition circuit, winning the Gold Medal at the 2018 Fischoff Chamber Music Competition, First Prize at the 2017 M-Prize Chamber Arts Competition, the Alice Coleman Grand Prize at the 2013 Coleman Chamber Music Competition, and 1st Prize at the 2012 North American Saxophone Alliance Competition.

The quartet’s programming takes the audience on an adventure through time, geography, and genre, often mixing classics from the 18th , 19th , and 20th  centuries with commissions by today’s composers and rollicking in-house arrangements from various folk traditions. In addition to their live performances, the quartet recently released two albums featuring predominantly recent commissions and winning pieces from Sinta Quartet’s annual National Composition Competition. The first, Collider, hailed as, "An exciting ride! The ensemble, intonation, and technique in this recording are beyond question" (The Saxophonist Magazine), was released in 2019, and the second, Ex Machina, which was praised as “tightly performed and flawlessly recorded in generous, in-your-face sound” (Musical America), was released in February 2020.

All four members of SQ are also passionate and dedicated teachers and relish the opportunity to play for and work with students of all ages. They carefully craft and curate programs designed for all levels of public school students and every type of community venue.

While Dan, Zach, Joe, and Danny all grew up in drastically different parts of the country (NY, TX, MI, and CA), they met at the University of Michigan where they studied with the legendary saxophone professor, Donald Sinta, and decided to name the group after him for the profound influence he had on each member and the inspired coaching he gave to the group during their student years.

Founded and still based in Michigan, Sinta Quartet’s members are all Selmer-Paris Artists and perform exclusively on Selmer saxophones.